“Our lives begin to end the day we become silent about the things that matter.” – Dr. Martin Luther King Jr.

What do we dream of? A new film series called Futures We Dream answers this question by showcasing stories of hope and resilience from everyday people making a difference across the country.

Created for the FUTURES exhibition at the Smithsonian’s Arts + Industries Building, the eight shorts depict themes of urban greenspaces, prison abolition, mutual aid, climate optimism, birth justice, indigenous futurism, and liberation. Join us for a virtual afternoon screening of inspirational and uplifting storytelling, audience talkbacks, music from Amikaeyla Gaston, and discussion with the award-winning filmmakers behind the work. 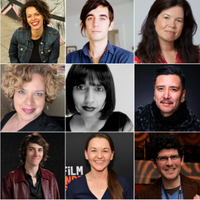 Futures We Dream features new work by nine independent filmmakers, made possible through a joint effort of Grammy Award-winning entertainment icon LL Cool J and Kevin Bright, the longtime executive producer and director of the TV show “Friends,” as co-chairs of the series along with a first of its kind partnership with the nationally acclaimed nonprofit The Alliance for Media Arts + Culture.

Each filmmaker hand-selected a grassroots organization for creative collaboration, uplifting stories behind some of the most pressing social justice issues across the U.S., including: healthcare, environment, Indigenous rights, youth incarceration, cultural heritage, immigration, and more. These gripping visions of the future are grounded in hope, resilience, and inspiration.

They further include: “Appalachian Futures,” a collaboration between Emmy-nominated filmmakers, activists and journalists Sally Rubin and Ashley York and the support network STAY Project that provides glimpses of the hopes and prospects of young people in the Appalachian region; “Rising” from Puerto Rican native New Yorker and Mellon National Foundation-awarded playwright and actor  Mildred Ruiz-Sapp, who partnered with Southern Oregon Shakes SafetyNet to tell the story of how artists from the Oregon Shakespeare Festival worked to help the Oregon town Ashland after it was ravaged by fires in 2020; “Freedom Constellations” from multimedia artist  Mark Strandquist and Richmond, Virginia-based youth incarceration cultural organizing project Performing Statistics, which tells the stories of young people impacted by the juvenile justice system; and “Tiichajil (Good Life)” from Academy Award and Sundance Award-winning director and producer  Pamela Yates and members of the Pueblo Maya-Ixil, which tells the story of three Mayan men from Guatemala seeking asylum in Texas after months in an ICE detention center.

The program is a creative partnership with the nationally acclaimed nonprofit The Alliance for Media Arts + Culture, and the DC Public Library.